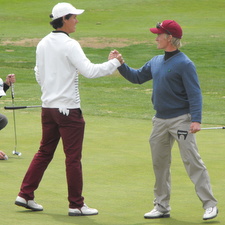 Eric Hoos has played in a U.S. Open and he won a tournament on what is now known as the Web.com Tour. And even though he's a couple of decades older now, being in contention still gets his competitive juices flowing.

He even felt some of that on Sunday in the final round of the CGA Four-Ball Championship at Legacy Ridge Golf Course in Westminster. But as a practical matter, he had a couple of dogs in the fight.

Hoos didn't end up winning the tournament, but the University of Denver men's golf coach finished second to two of his players, senior Jordan Burgess and junior Ole Ramsnes. So even though Hoos might catch a little friendly grief about that, it was kind of a win-win situation for him.

"Being pretty competitive, I really don't ever like to lose, but I'd rather lose to them than anybody else," Hoos said with a little chuckle. "My job now is to make them better. It gives me great pride to do that."

Ramsnes and Burgess, who just completed their college season, overcome their head coach -- and his partner, Tom Krystyn of Meridian Golf Club -- on Sunday thanks to the round of the tournament, a 10-under-par 61 in the scratch two-man best-ball format. That gave the Pioneers teammates a two-stroke victory over Hoos and Krystyn.

(In the photo above, Burgess, left, congratulates Ramsnes after the latter made a birdie on the 18th hole Sunday.)

Meanwhile, 60-year-olds Kelly Crone and Larry Netherton -- who like Burgess and Ramsnes play out of Highlands Ranch Golf Club -- claimed the CGA Senior Four-Ball title for the second time in five years, this time at Todd Creek Golf Club in Thornton. (Netherton is pictured at left in the accompanying photo.)

The two four-ball tournaments, held concurrently, marked the first championships of the 2013 season for the CGA.

At the Four-Ball at Legacy Ridge, Ramsnes and Burgess each captured his first CGA championship after posting a 15-under-par 127 total. But just as important was beating Hoos.

"It was a tournament within the tournament for all of us," said Burgess, the runner-up in the CGA Stroke Play Championship last year.

"They knew it was a big competition between us," said Hoos, the low amateur in the HealthOne Colorado Senior Open two years ago. "It was fun to get out there and battle. But I'm very proud of them. Both Jordan and Ole worked so hard during the year and they haven't had the success they probably would have liked. I'm so happy for them that (the win) showed the work ethic is paying off and they're going in the right direction."

Ramsnes, a Norwegian who just completed his junior season at DU, made an eagle and seven birdies on his own ball Sunday. Playing his first CGA championship, he didn't putt out everything in the team format, but if he had he probably would have shot a 62 individually. Meanwhile, Burgess, a resident of Windsor, birdied their final hole to give the teammates the two-stroke victory.

"That was my best round (ever)," said Ramsnes, who eagled the par-5 third hole by hitting driver-4 iron to 12 feet and draining the putt. "I just had one of those days where putts were dropping and I felt really good. We had a great time, and that just made us play good. (Hoos and Krystyn) played really well. It was kind of fun to see that it actually mattered that we shot 10 under to beat them by two."

The "just have fun attitude" obviously paid off in the end for Burgess and Ramsnes (pictured at left with their trophies).

"It feels good to win," said Burgess, who tentatively plans to turn professional sometime next year. "It's nice just to come out here and have fun the last couple of days after just finishing up our college season. Obviously we definitely wanted to win too, so it worked out."

Hoos, of Bear Creek Golf Club, and Krystyn were the only team closer than five shots to Ramsnes and Burgess. The elder twosome carded a 7-under-par 64 on Sunday and likewise went bogey-free for 36 holes, finishing at 129.

First-round leaders Eric Hallberg and Connor Klein closed with a 68 to be one of four teams tied for third place at 132.

At the Senior Four Ball, 2009 champions Crone and Netherton won by two at Todd Creek after consecutive rounds of 4-under-par 68. They made five birdies and one bogey each day en route to their 8-under 136 total.

Besides previously winning the Senior Four-Ball, Crone and Netherton paired up to claim the CGA Senior Two-Man Team Championship in 2007.

The key this time, said Crone, was ham-and-egging it.

"When one of us was in trouble, the other stepped up," said Crone, a past champion in both the CGA Senior Stroke Play and Senior Match Play. "That really helps. You've got to have a good partner when you need it."

Robert Polk of Colorado Golf Club, a two-time winner of the Senior Four-Ball, teamed with Bill Fowler of Bear Creek to finish second as a closing 67 left them at 138.

Both the Four-Ball and Senior Four-Ball were originally scheduled to be 54-hole events, but the snowstorm earlier in the week led to them being shortened to two rounds each.