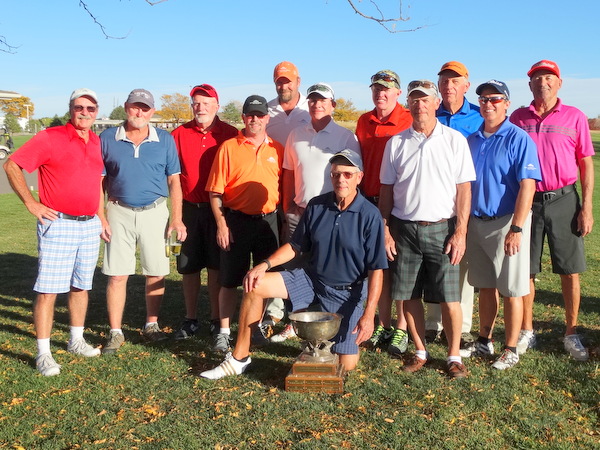 The players from Battlement Mesa Golf Club had to travel a long, tough road -- literally and figuratively -- but that didn't keep them from emerging with the title in the season-long CGA Team Interclub Championship that concluded Sunday at CommonGround Golf Course in Aurora.

After a trip of more than 200 miles to participate in the finals of the net match play championship, Battlement Mesa handed The Broadmoor Golf Club its first loss of the season, scoring a decisive 26-10 victory in the title match. Battlement Mesa claimed the trophy despite being the 16th seed in the 16-team playoffs.

It marked the first CGA Team Interclub title for Battlement Mesa (pictured above), which made it to the finals in 2011 but lost to Lone Tree Golf Club, which remains the only two-time winner of the event.

"Anytime you can play for a state title, definitely it's a big deal for the club," said Doug Choate, the head superintendent at Battlement Mesa, who won both his singles and four-ball matches on Sunday. In fact, in singles, Choate defeated The Broadmoor's

David Schroeder Jr., the runner-up in the 2011 CGA Amateur that was played at CommonGround. (Choate is pictured at left, in white, with four-ball partner Mark Barlau.)

All in all, the result was quite a feat for the golfers from the Western Slope.

"It's such a great accomplishment for such a small community," noted Jack Elsea, Battlement Mesa's longtime team captain who wrapped up his run with the club as he recently moved to Montrose. "But it's a quality course and that probably sharpens everybody up.

"For us to come over here and have the opportunity to play The Broadmoor was a great experience. We played them last year and they took us out in the quarterfinals so we kind of owed them one. This is redemption, so to speak."

Battlement Mesa finished the year 6-1, having avenged its one loss of 2016 -- to Lincoln Park Golf Course in the regular season -- by beating LPGC in the quarterfinal round of the playoffs. The Broadmoor, which has made the finals an unprecedented three times -- each of the last three years -- lost for just the third time in 21 matches since the beginning of 2014, the year the club won the title.

"When you get to this point, everybody is good," noted Mike Allred, one of three Broadmoor players to win in Sunday's dozen singles matches. "You've got to play your best golf or you're not going to win. We've played these (Battlement Mesa) guys two years in a row and they're good." (Allred is pictured in purple at left, with four-ball partner Schroeder.)

Both Battlement Mesa and The Broadmoor advanced to the finals from an original field of 42 clubs after roughly five months of competition. First, there's a regular-season round-robin of geographically-linked groups of teams lasting from May through mid-summer. The team from each group with the highest point total advanced to the playoffs -- along with five runners-up, including Battlement Mesa. Playoff matches ran from August through October.

"It starts out pretty relaxed," Choate said of the Team Interclub season. "But the farther you go the more competitive it gets."

Both in the regular season and the playoffs, teams of a dozen men each -- of widely varying abilities -- square off, with singles and four-ball matches held concurrently. Each individual match is worth two points -- two for a win and one for a tie.

Seven players won both their singles and four-ball matches on Sunday -- six from Battlement Mesa and one from The Broadmoor.

From Battlement Mesa, the 2-0 players were Charles Perrin, Dan Rzonca, Choate, Charles Hall, Fred Inman and Jeff Bradley. (Perrin and Rzonca are pictured below.) The Broadmoor's Jim Hafemeister, one of six Broadmoor players to have competed on the club's 2014 title-winning team, also was 2-0.

Five Battlement Mesa players were back after playing in the 2011 finals loss to Lone Tree: Choate, Perrin, Hall, Elsea and Ken Seidel. The seven others on the 2016 championship team are Bruce Knuth, Luke Cody, Rzonca, Barlau, Inman, Eddie Rubin and Bradley.

As the 16th and last team to make it into the playoffs, Battlement Mesa routed top-seeded Riverdale 29-7 in the round of 16, then defeated No. 8 Lincoln Park 19-17, No. 12 The Meadows 20-16 and No. 3 The Broadmoor 26-10. For three of those playoff matches -- versus Riverdale, The Meadows and The Broadmoor -- Battlement Mesa made the six-hour roundtrip drive to the Denver metro area.

The seventh year of the CGA Team Interclub concludes the CGA's 2016 championship season.

As part of the Team Interclub, the CGA will donate $500 each to the junior golf programs at Battlement Mesa and The Broadmoor.

At Par-71 CommonGround GC in Aurora