Jason, Kyler Dunkle Run Away with Title at CGA Father/Son 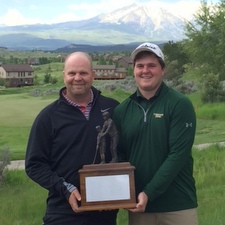 The only previous time Jason and Kyler Dunkle competed in the CGA Father/Son Championship, Kyler was just 13 years old and the Dunkles finished 28th overall in 2010.

Now with Kyler, 18, being a golfer at Colorado State University, and a former 5A state high school champion, suffice it to say things were considerably different in the Dunkles' return appearance at the Father/Son this weekend.

"He's a much different golfer now than he was then," Jason said of Kyler.

The team from the Club at Pradera cruised to the title Sunday at Ironbridge Golf Club in Glenwood Springs, tying for the largest victory margin in the event since 2005: five strokes.

The Dunkles backed up their first-round 63 -- in a Chapman Scotch format -- with a 4-over-par 76 in foursomes stroke play, also known as alternate shot. That gave them a 5-under 139 total, making them the only team to finish under par at Ironbridge.

For each of the Dunkles, it was CGA championship No. 1. So the emotions were much different than they were back in 2010 for their Father/Son debut.

"I remember on the second day that year, I played some of the worst golf I could have possibly played," Kyler said Sunday. "It was kind of disappointing. But it's good to come back and almost get some revenge.

"It's fun for me because my dad is a great golfer and he always has been. It's always been a competition between the two of us. This was kind of one time where we'd let the competition go and play together and compete against other guys. We were able to have a lot of fun up here. It was a weekend where we could relax and hang out and play some really solid golf."

The Dunkles weren't at their best at their end -- they played their final 14 holes in 6 over par on Sunday -- but considering they were 11 under for their first 22 holes, it didn't matter in the least. They finished the second round with two birdies, two bogeys and two double bogeys.

The last bigger margin of victory in the Father/Son came in 2005, when Gary and Alex Kephart prevailed by eight. Rick and Nick Tarasiewicz also won by five, two years ago.

"There was certainly pressure today, but I didn't feel like, 'Wow, I hope we don't screw this up,'" Jason Dunkle said. "When you're 43 years old and you can hang out with your son for two days, there's nothing better. Win, lose, draw, it was awesome."

Kyler Dunkle claimed the 2012 5A state high school championship and redshirted this past season for CSU, leaving him four years of eligibility remaining. Jason played college golf for the University of Northern Colorado in the 1990s, and is a former head coach for the boys golf team at Rock Canyon High School, where he teaches.

"I've been a high school golf coach, so I've seen a lot of kids develop and it's fun to see your son develop so you can go out and have a great time playing golf with him," Jason said. Winning the title with him "is very meaningful."

Ray and Jimmy Makloski of Pueblo Country Club, each a winner of a CGA individual championship in 2012, tied for second place on Sunday at even-par 144 with Chris and Russell Roehrkasse of Colorado Springs Country Club. The Makloskis closed with a 73 and the Roehrkasses with a 75.

The Kepharts, winner of this event a record four times, checked in at 146, in fourth place, after a 76 on Sunday.

Both the Dunkles point to their stellar 63 on Saturday -- which gave them a six-stroke lead -- as the key to their victory. In fact, Jason Dunkle said at one point in the round they entertained thoughts of shooting 59.

"I don't want to say it was a fluke because we were both playing really well, but it really helps when you can start off strong and feed off each other's energy," Kyler said. "That's exactly what we did. And if one of us hit a poor shot, we were able to pick each other up."

Prevailing in the net division Sunday were Roehrkasses, who shot 66-72 for a 138 total. That was two better than the three team runners-up net-wise: Ben and Ryan Hettich (68-72) of Patty Jewett and Garden of the Gods Club, respectively; Joe and Peter Morrill of Eagle Ranch Golf Course (61-79); and Dennis and Andrew Weber of Hyland Hills (66-74).

The Loel and Caleb Lierman Award, given to the team with a player 18 or younger which has the lowest gross score, went to Dunkles.