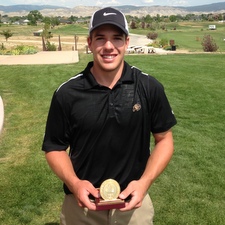 Drew Trujillo will celebrate his 20th birthday on Monday, but he received a nice gift on Sunday afternoon.

The University of Colorado golfer finished with a chip-in birdie and overcame a two-stroke deficit on the last hole Sunday to win the 31st CGA Western Chapter Championship at The Bridges.

Trujillo, who plays out of the Montrose-based course, holed a 15-foot chip on the final hole while first-round leader Branden Barron of South Suburban Family Sports hit his second shot into the water and took a double bogey. Barron missed a 10-foot bogey putt on No. 18 that would have forced a playoff.

Going into the final hole two down, "I was just thinking, 'make birdie'," said Trujillo (pictured above). "I just wanted to give myself a chance. I didn't expect it to happen the way it happened.

"It was just a surprise and a shock when I came into clubhouse (and ended up winning)."

Trujillo overcame a 17th-hole bogey following an out-of-bounds ball and shot a 1-under-par 70 on Sunday to finish at 3-under 139 at his home course. Barron, a former state high school runner-up, closed with a 73 after making two double bogeys on Sunday, leaving him at 140. He went into the final round two ahead.

Jack Adolfson of the Fox Hill Club, who placed second Friday in the CGA Junior Match Play, finished third on Sunday at 142 after firing a 73.

In the senior championship flight, Scott Sullivan (pictured at left) of Bookcliff Country Club in Grand Junction went wire-to-wire and claimed the title going away.

Sullivan, a former U.S. Senior Open contestant and the 2011 CGA Senior Match Play runner-up, shot a 4-under-par 67 Sunday to post a 7-under 135 total, which was good for a nine-stoke victory. Sullivan made five birdies and one bogey on Sunday.

As for the open championship, Trujillo was aiming for his first CGA title after finishing third in the Western Chapter last year and second in 2011. And earning the top spot was especially important given that the Western Chapter Championship was being held at his home course, and his parents were in attendance on Sunday.

"I've been in the last group on the final day in this event each of the last four years, and it was on my course, so I really wanted to get a win," Trujillo said. "And the way I won was spectacular.

"I felt like this was my turf, so that made my desire to win even greater, and I was also playing in front of my parents."

Trujillo initially tied Barron on Sunday after making consecutive birdies on holes 8, 9 and 10. But when Barron birdied 17 and Trujillo made bogey after hitting his tee shot out of bounds right, Barron was two ahead with one hole remaining. However, on 18 things took a big turn.

Barron hit his tee shot right into some long fescue. After Trujillo's tee shot went into the rough, his approach just missed the green left. Barron's second shot went into the water, then he hit his fourth to about 10 feet from the cup on the par-4. And when Trujillo chipped in and Barron missed his putt, the victory went to the junior-to-be from CU.

Trujillo, a 2011 U.S. Amateur qualifier, had quite the adventure on holes 17 and 18 both days. On Saturday, he went eagle-double bogey on those holes in the middle of his round, then Sunday it was bogey-birdie.

Though Trujillo is certainly no stranger to The Bridges, he doesn't believe his home-course edge amounted to much.

"I didn't think it was that great an advantage," he said. "The course is right in front of you. If you hit good shots, you'll be OK. I think it was pretty fair for everyone."

CGA Western Chapter Championship
At Par-71 The Bridges in Montrose