The U.S. Women’s Open will be contested in Colorado for the third time next week (July 7-10) as the Broadmoor in Colorado Springs hosts the top event in women”˜s golf. Here are some of the most notable storylines to follow during tournament week:

1. Tseng Watch. When she captured the LPGA Championship title last week, the 22-year-old Yani Tseng (pictured) became the youngest female to win four major championships. If she also wins the U.S. Women’s Open, she’ll be the youngest player to complete the career grand slam as she”˜s already claimed the Kraft Nabisco Championship, the LPGA Championship twice and the Women’s British Open. Tseng has been the No. 1-ranked women’s player in the world since the start of the LPGA season and has won her last two tournaments.

Only six women in history have won all four majors — Louise Suggs, Mickey Wright, Pat Bradley, Juli Inkster, Karrie Webb and Annika Sorenstam. Webb is the youngest to accomplish the feat at 26 years and 6 months.

King placed third in the 1995 U.S. Women’s Open at the Broadmoor.

3. Quest for Attendance Record. Officials of this year’s tournament have made no secret that they think they can break the weeklong attendance record for the U.S. Women’s Open. The 2005 tournament, held at Cherry Hills Country Club just south of Denver, holds that record at 131,137 for the week.

4. 13-Year-Old In the Field: About a month shy of her 13th birthday, Mariel Galdiano of Pearl City, Hawaii qualified for the U.S. Women’s Open, becoming the third-youngest qualifier in the history of the event. The two players who qualified at a younger age are also in the field at the Broadmoor (Alexis Thompson in 2007 and Morgan Pressel in 2001). Both were slightly younger 12-year-olds when they qualified. Galdiano has since turned 13.

5. Reading the Befuddling Broadmoor Greens: While the Broadmoor’s East Course will play up to 7,047 yards — a record for the U.S. Women’s Open — the greens will be more of a challenge. As always at the resort’s courses, figuring out just how much putts break away from the Will Rogers Shrine on Cheyenne Mountain will be a big key for success.

“I personally have found them to be the hardest greens I’ve ever been on anywhere to read,” USGA executive director Mike Davis said. “”¦ Distance is not going to be the issue. It’s going to be those greens that are going to drive the players nuts. You’re going to see players hitting putts (where) you think it’s going this way and it goes (the opposite) way. And they’re just going to be baffled.”

6. Can Americans Come Through Again?: Tseng, who was born in Taiwan, is the No. 1 player in women’s golf, but Americans have made their presence felt in several of the most recent major championships. Three of the last five grand slam events have been won by U.S. players: Cristie Kerr (2010 LPGA Championship), Paula Creamer (2010 U.S. Women’s Open) and Stacy Lewis (2011 Kraft Nabisco). 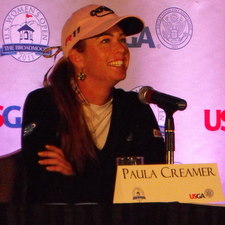 “Every time I walk into my house, my trophy sits on my kitchen table,” she said recently. “And it’s the nicest breakfast, lunch and dinner I’ve ever had.

“Oakmont (last year) aged me, but I feel that I’m a better player because of it. More importantly, I’m ready to do it again this year.”

Creamer comes to the Broadmoor after three top-five finishes in her last four starts.

8. Close Calls for Kerr: Cristie Kerr may be winless this year, but she’s certainly knocked on the door a lot. In her last four LPGA Tour events, she’s finished second, second, second and third. In the eight tournaments she’s played since mid-March, he’s placed in the top four six times.

9. Big Events, One After Another: There are some big gaps on the 2011 LPGA Tour schedule, but the major championships are coming seemingly one after another this summer. In the course of 39 days, three of the LPGA grand slam tournaments are scheduled: LPGA Championship June 23-26; U.S. Women’s Open July 7-10 and the Women’s British Open July 28-31.

10. Colorado Golf Icons Honored. Two Colorado Golf Hall of Famers — and fixtures at the Broadmoor Golf Club — will receive accolades in the days leading up to the Women’s Open. Judy Bell, the only female president in the history of the USGA, and Barbara McIntire, a stellar amateur in the 1950s, “˜60s and “˜70s, will both be honored as great champions as ambassadors by the LPGA and the USGA at a Tuesday night function. Then on Wednesday night, Bell will be the first female recipient of the Nicholson Award, which recognizes a lifetime of commitment and dedication to the game of golf. Previous Nicholson Award recipients are Will Nicholson Jr., Arnold Palmer, Jack Nicklaus, Tom Watson and Ben Crenshaw.

Irwin had the most notable quote about the incident, saying that when the bear got that close, “Dottie about wet her britches.”

Russ Miller, director of golf at the Broadmoor, liked the attention the bear drew last time around.

While noting that championship officials want to avoid any dangerous situations, Miller said, “I kind of hope (the bears) get on TV again.”

12. Local Players Missing: There’s precious little local flavor in the 156-player field. None of the most prominent current LPGA regulars who have Colorado ties — Stephanie Sherlock, Jill McGill, Kimberly Kim and Alison Whitaker — qualified for the Women’s Open. Sue Kim of Canada has one of the few Colorado connections, having played at the University of Denver for one semester before leaving school at the beginning of 2010 and turning pro later last year.

13. An Eye Toward the 2013 Solheim Cup: With many of the key people involved already in the state for the U.S. Women’s Open, a media event for the 2013 Solheim Cup (the female version of the Ryder Cup) has been planned for Colorado Golf Club on July 11, the day after the conclusion of the Women’s Open. Among those scheduled to be on hand are Paula Creamer, Michelle Wie, Morgan Pressel, Angela Stanford and Kristy McPherson, along with U.S. captain Rosie Jones and assistant captain Juli Inkster.

U.S. Women’s Open: All the Essentials

Where: Broadmoor Golf Club (East Course) in Colorado Springs. The East Course will be played at up to 7,047 yards (a record for the event) and to a par-71. Greens will run 10Â½-11 on Stimpmeter.

Format: 72 holes of stroke play, with the field cut to the low 60 players and ties — and anyone within 10 strokes of the lead — after two rounds.

Youngest Player in Field: Mariel Galdiano, a 13-year-old from Hawaii.

Tickets: Available at 2011uswomensopen.com, at 877-281-OPEN, or at participating King Soopers stores. FOR MORE INFORMATION, CLICK HERE. Note: The Broadmoor gates open at 6:30 a.m. each day Thursday through Sunday (July 7-10).

Kids-get-in-free policy: Youngsters 17 and under will be admitted free with a ticketed adult. The front row of all grandstands will be reserved exclusively for kids.

Military discounts: Military personnel (active and retired) with I.D. and their families will be admitted free on Monday (July 4) and will receive 50 percent off normal ticket prices the remainder of the week.

Public parking: Spectator parking will be free and located at the former Vineyard Golf Club (3819 Janitell Road, via Exit 138). From there, spectators will be shuttled to the tournament site. Shuttles will run from about 6 a.m. to two hours after the completion of play.

Creamer clinic: Defending champion Paula Creamer will conduct a junior exhibition on July 5 (Tuesday) at 2 p.m. on the practice range.

Sorenstam exhibition: Honorary chair Annika Sorenstam, winner of the 1995 U.S. Women’s Open at the Broadmoor, will conduct an exhibition along with 13-year-old qualifier Mariel Galdiano on July 6 (Wednesday) at 11 a.m. on the practice range.