Down to the Final Dozen

The top stories of 2018 in Colorado golf, Part II 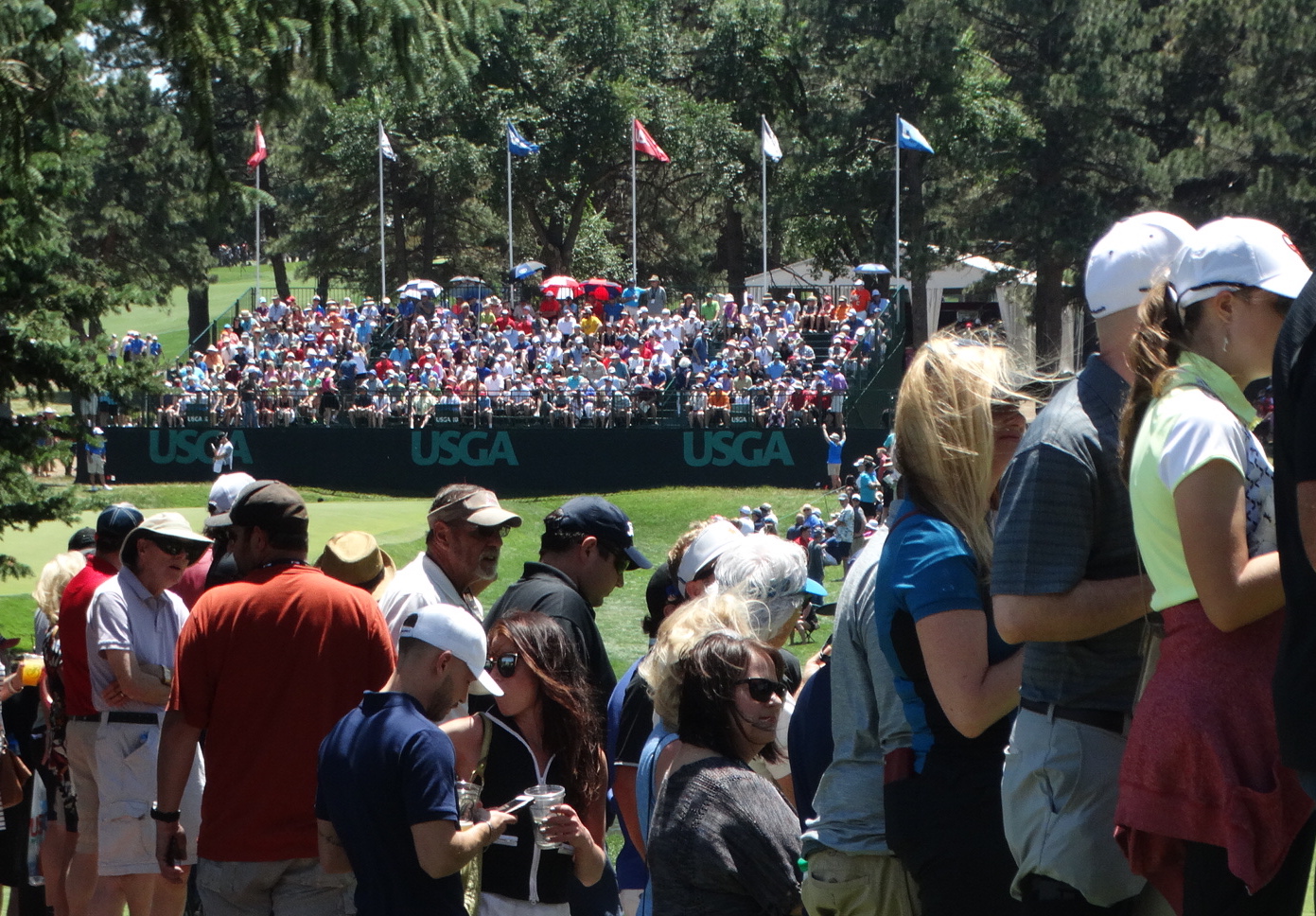 Following up from earlier this week, when we started our two-part retrospective on the top Colorado golf-related stories of 2018 (CLICK HERE for the first installment), we continue our countdown with the top dozen stories of the year -- in reverse order. And at the end, included is a list of honorable-mention selections.

12. Stewart Signs With No. 1-Ranked College Team in Nation: It's not often that a Colorado golfer signs a national letter of intent with the No. 1-ranked college program in the nation. But such was the case in November when Dillon Stewart of Fort Collins put his John Hancock on the dotted line with Oklahoma State. Stewart, who graduated from Fossil Ridge High School this month, will be headed to Stillwater for the fall semester next year. The Junior Golf Alliance of Colorado's Boys Player of the Year is one of at least nine Colorado residents or JGAC members from the Class of 2019 who are headed to NCAA Division I golf programs. READ MORE

11. Another National Honor for Colorado PGA: Dating back to the late 1950s, members of the Colorado PGA or the Section itself have won 19 national awards from the PGA of America. Ten of those 19 have come since 2007, including this year's Herb Graffis Award for player development, which the CPGA received for the second time since 2011. READ MORE

9. Colorado, Hiwan Shine as Girls Junior Americas Cup Hosts: The Girls Junior Americas Cup -- a team competition featuring players from the western U.S., Canada and Mexico -- is hosted just once every 18 years by Colorado, and 2018 was the Centennial State's turn. Hiwan Golf Club in Evergreen, where the Colorado Open was held from 1964 to '91, was a fitting mountainous setting for the event. While Mexico swept the team and individual titles, Colorado posted its best finish since 2013 by placing fifth out of 18 teams. Staff and volunteers from the CGA and the Junior Golf Alliance of Colorado played major roles in running this major junior event. READ MORE

8. Colorado Sweeps Team, Individual Titles at Boys Junior America's Cup: At the same time the Girls Junior Amerias Cup was taking place at Hiwan, a Colorado team (left) was making history at the boys Junior America's Cup in Montana. For the first time in the 44 years in which Colorado has competed in the event, its squad claimed the team title. In fact, a Colorado team had never finished better than third before this year in the competition that includes players from the western U.S., Canada and Mexico. To add to the feat, Dillon Stewart of Fort Collins won the individual title out of the 72-player field. Joining Stewart on the winning team were Cal McCoy of Highlands Ranch, Davis Bryant of Aurora and Walker Franklin of Broomfield. Former longtime CGA staffer Dustin Jensen captained the Colorado squad. READ MORE

7. 2 Coloradans Qualify for PGA Tour, 2 More for LPGA Tour: Seldom have players who grew up in Colorado enjoyed so much success in qualifying for the top men's and women's golf tours in the world as they did in the final half of 2018. Wyndham Clark and Jim Knous earned promotions to the PGA Tour with their performances on the Web.com Tour regular season and Finals, respectively. And Jennifer Kupcho and Becca Huffer landed spots on the LPGA Tour in 2019 by both finishing in the top 10 in the eight-round LPGA Q-Series, with Kupcho placing second and Huffer 10th. All four Coloradans will be rookies on those top circuits in 2019. In fact, the PGA Tour's wraparound season began in October, and Knous recorded a top-10 finish in his first event as a member of that Tour. Joining Kupcho and Huffer in earning an LPGA card last month was former University of Colorado golfer Robyn Choi.

6. Gearing Up for Rules Changes: With the modernized Rules of Golf set to take effect on Jan. 1, the USGA and its affiliated Allied Golf Associations have been very busy trying to bring members up to speed on the changes. For the CGA, that effort has included weekly "Ready for the 2019 Rules" videos and four-hour Ready for the Rules seminars held at various locations around the state late in 2018 and also planned for the first several months of 2019. READ MORE

unification a year ago of the CGA and CWGA after both associations had celebrated their 100th anniversaries as separate -- but complementary -- organizations serving golf in Colorado. With 2018 being their first full calendar year together, things have gone, by just about any measure, extremely well. All of which is very good news, considering how many golfers the new-look CGA serves as members. There's still work to be done, but it's certainly been a stellar first year together.

4. CSU Golfers Claim USGA National Title: Golfers with strong Colorado ties don't often get to say they're reigning USGA national champions, but Colorado State University golfers Katrina Prendergast and Ellen Secor (left) earned that honor by winning the U.S. Amateur Four-Ball title in early May in Tarzana, Calif. The two never trailed in the first four matches they played at El Caballero Country Club. In the title match, they were 2 down with four holes left, but a big-time rally down the stretch netted them a 1-up victory over teenagers Yachun Chang of Chinese Taipei and Lei Ye of China -- and the national championship. The victory was believed to be the first USGA national amateur championship by a person or team with strong Colorado ties since Jill McGill won the 1993 U.S. Women's Amateur and 1994 U.S. Women's Amateur Public Links. READ MORE

3. Vickers Passes Away: There are almost 12 dozen people in the Colorado Golf Hall of Fame, but even in that select group, there are some that took it to the next level. A good rule of thumb as to who those people are is if they've also been inducted into the Colorado Sports Hall of Fame. There are less than a dozen people who are members of both Halls of Fame. One of them passed away in September -- 93-year-old Jack Vickers. Vickers made his mark in a variety of sports, but likely will be most remembered as the founder of Castle Pines Golf Club and The International that hosted PGA Tour events for 21 years. No less than Jack Nicklaus, who designed Castle Pines, paid tribute to Vickers the day he died. Vickers' International ran from 1986 through 2006. It featured a unique modified Stableford scoring system, which promoted aggressive play as a birdie and a bogey were worth more than two pars. The tournament produced quite a few big-name champions, including Greg Norman, Davis Love III (twice), Phil Mickelson (twice), Vijay Singh and Ernie Els. READ MORE

2. Kupcho Phenomenon Continues: Jennifer Kupcho of Westminster may very well accomplish great things in the coming decades, but even long into the future, 2018 will be a year she'll remember fondly. Here's a brief rundown of what she accomplished: The Wake Forest golfer won an NCAA Division I individual title a year (left) after placing second. She became the first Colorado resident to win the prestigious individual championship on the women's side. She helped three U.S. national teams capture international team titles in 2018 -- at the Curtis Cup, the Arnold Palmer Cup and the Women's World Amateur Team Championship. In the latter event, Kupcho finished second individually out of a field of 170. She also placed second at the eight-round final stage of LPGA Q-school. After concluding her college career in May, she'll immediately begin her LPGA career. Kupcho finished an LPGA career-best 16th this year in the LPGA Marathon Classic. Overall in 2018, she won three individual college titles. Kupcho also claimed the prestigious Mark H. McCormack Medal, becoming the first American to win the women's McCormack honor as the top female player in the Women's World Amateur Golf Rankings as of the conclusion of the U.S. Women's Amateur. And she was named the world female Amateur of the Year by digital new magazine Global Golf Post. READ MORE

1. U.S. Senior Open a Hit at The Broadmoor: It had been almost four years since Colorado had hosted a big-time tour-level event -- the kind that attracts 100,000-plus fans. But the drought ended this year when the U.S. Senior Open (pictured at top) was conducted at The Broadmoor in Colorado Springs. And the results didn't disappoint. The announced attendance for the week was 134,500, the most for the Senior Open since the 157,126 in Omaha, Neb., in 2013. David Toms, who won the 1999 Sprint International at Castle Pines but hadn't captured a title on the PGA Tour or PGA Tour Champions in seven years, captured the victory at the Senior Open by one stroke. Colorado Golf Hall of Famer Brandt Jobe placed fifth, marking his second straight top-5 performance in the U.S. Senior Open. Shortly after the conclusion of the championship, the USGA announced that the U.S. Senior Open will return to The Broadmoor in 2025.

-- Lauren Howe, who grew up in Colorado, was a finalist in the U.S. Girls' Junior as a 15-year-old and went on to win an event on the LPGA Tour, was voted into the Colorado Golf Hall of Fame.

-- Patrick Reidy became the fifth 50-something player in the last six years to win the Colorado PGA Professional Championship.

-- Three Colorado courses -- Castle Pines, Ballyneal and Cherry Hills -- are ranked among the 150 Greatest International Courses, according to Golf Digest.

-- Kaden Ford of Colorado Springs finished sixth -- tying the best showing ever by a Coloradan -- in the Drive, Chip and Putt National Finals at Augusta. At the 2019 National Finals, three Coloradans will compete -- Caitlyn Chin of Greenwood Village, Chunya Boonta of Centennial and Grady Ortiz of Colorado.

-- The University of Denver women's golf team saw its remarkable string of league tournament championships end at 14, though the Pioneers' Sophie Newlove claimed the individual title at Summit League Championship.

-- CU's Robyn Choi qualified in Colorado for the U.S. Women's Open for a second straight year. Choi later earned her LPGA Tour card at the final stage of Q-school.

-- Doug Rohrbaugh, who was paired with Scott McCarron and Miguel Angel Jimenez at the Senior PGA Championship, became the first golfer to sweep the Colorado PGA Player of Year and Senior Player of Year honors in the same season. Like Rohrbaugh, Colorado PGA professional Chris Johnson qualified for two PGA Tour Champions majors in 2018 -- the U.S. Senior Open and the Senior PGA Championship.

-- Nicholas Pevny of Aspen captured a national title, prevailing in the boys 12-13 age division of the Optimist International Junior Golf Championships in Florida.

-- New Colorado resident Dan Erickson shot a 9-under-par 61 -- a course record by two strokes at Fort Collins Country Club -- en route to qualifying for the U.S. Amateur, where he made match play but bowed out in the round of 64 at Pebble Beach.

-- Greg Condon of the southern Colorado town of Monte Vista shared stroke-play medalist honors in the U.S. Senior Amateur, while Scott Sullivan of Grand Junction advanced to the match play round of 16.

(Note: This story was updated on Jan. 2)