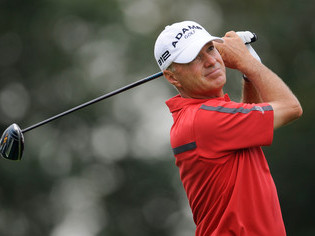 If not for a disastrous Thursday, Gary Hallberg would be fully exempt on PGA Tour Champions in 2019.

The Boulder County resident had three solid rounds at TPC Tampa Bay in Lutz, Fla., shooting a 72 on Tuesday, and 69s on both Wednesday and Friday in the final stage of Champions Q-school. The total for those three days -- 3 under par -- would have been good enough for the top-five finish necessary for a full tour card.

Unfortunately for Hallberg (left), there was that matter of an 82 on Thursday, when he played his final dozen holes of the day in 12 over par.

The bottom line is that Hallberg again will have to make do with conditional status on PGA Tour Champions, which will limit the number of tournaments in which he can compete. The Coloradan placed 63rd on the 2018 Charles Schwab Cup Champions money list after a season that included him finishing eighth in the PGA Tour Champions PURE Insurance Championship in late September.

Hallberg, winner of three PGA Tour events and one on PGA Tour Champions, ended up in 38th place out of the 78-man field on Friday with a four-day total of 8-over-par 292. His final-round 69 included two eagles -- one of the par-4 first hole, his 10th of the day -- four birdies, three bogeys and a triple bogey on No. 18, his ninth hole.

Meanwhile, the other Coloradan in the field, Doug Rohrbaugh of Carbondale, finished 54th on Friday at 297. Rohrbaugh, the 2018 Colorado PGA Player of the Year, closed with a 71 to check in at 297. Rohrbaugh had conditional status on PGA Tour Champions in 2015 and has competed in 11 career events on the circuit.

Here are the round-by-round scores for Coloradans who competed in the final stage of PGA Tour Championship Q-school this week:

For all the scores from the final stage, CLICK HERE.