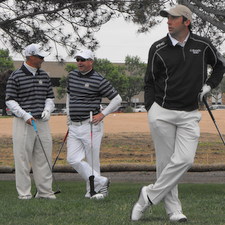 For quite a few years, there was an unmistakable pattern that developed in the annual matches between the pros and amateurs in the Colorado Cup men's open division.

From 2005 through 2011, the professionals won every odd year, while the amateurs took the evens.

But in recent seasons, the pros have gotten greedy.

When they prevailed in the matches held Wednesday at CommonGround Golf Course, it marked the third consecutive victory for the Colorado PGA in the competition, which dates back to 1971.

And, to add to the momentum, the CPGA's men's senior victory Wednesday marked the pros' seventh win in the last eight years over the CGA's amateurs in that division.

"Absolutely it's a big deal," said Caine Fitzgerald, the open-division pros' captain after winning the 2012 Colorado PGA Professional Championship. "There's a little pride, a little bragging rights between us and the amateurs. They have a great team. We saw their roster and knew it would be tough. But our guys just played real well."

While the Colorado PGA swept the men's divisions, the CWGA's representatives (in part pictured at left) continued to have a stranglehold on the women's side as their victory Wednesday made them 9-0 all-time against the pros.

On Wednesday afternoon, the women amateurs swept all six singles matches to win in a rout, 8-1.

"I didn't know (about the amateurs' perfect record)," said two-time CWGA Player of the Year Somin Lee, who was competing in her first Colorado Cup. "After (the four-ball matches Wednesday morning), they said they've never lost this thing before, so I was like, 'Oh crap, I've got to go out there and play well because I didn't win my match on the first 18.' So I thought, 'I'm going to go out there and have fun and hopefully I'll have good results.'

"It's still a tournament, so I love to win, and I want my team to win."

Lee almost missed her morning match altogether as she thought the Colorado Cup was set for next week rather than on Wednesday. It took a text from CWGA executive director Robin Jervey at 7:30 a.m. -- a half hour before the shotgun start -- to get Lee out of bed and to the course just in time.

The amateur women went undefeated in their nine matches (three four-ball, six singles), with two halves their only slight blemishes.

In the men's open division, the Colorado PGA pros (pictured below) prevailed 11-7, while the senior pros defeated the amateurs 10-8.

"Anytime you win it's always a good thing," Hunt said. "With the CGA guys there's a lot of great players. To be able to beat them three years in a row is great."

On the amateur open division side, despite the loss, Derek Fribbs and Brian Richmeier won both their four-ball and singles matches on Wednesday.

Among those who went 2-0 for the senior pros (pictured below) was captain Doug Rohrbaugh, who just last Friday won the HealthOne Colorado Senior Open. David Arbuckle, Doug Perry and Perry Holmes did likewise for the pros.

So is winning the Colorado Cup a big deal for Rohrbaugh and company?

"You can say yes or no beforehand, but once you get to the tee, absolutely it matters," Rohrbaugh said. "We all like to compete, and nobody likes to lose. It's my first time on the senior side. I'd be lying if I didn't say it feels good."

In a losing cause, senior amateurs Bob Chandler, Doug Jones and Jim LeMar won both their matches on Wednesday.