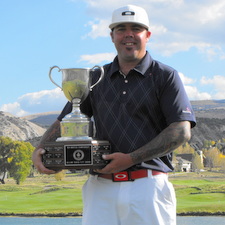 The "hardware" given out for winning the CGA Mid-Amateur Championship is supposed to be a "traveling trophy." But in recent years, it's mainly just resided wherever Keith Humerickhouse calls his home course.

And that will continue after the clinic the 36-year-old player from Gypsum Creek Golf Course put on over the weekend.

Humerickhouse became just the second player in history to capture three consecutive CGA Mid-Amateur Championships as he lapped the field on Sunday at Eagle Ranch Golf Course in Eagle, his new hometown.

The left-hander won by a dozen shots, marking the largest victory margin in the event since Rick DeWitt posted a 14-stroke win in 1991.

Not coincidentally, Humerickhouse and DeWitt are now the only players to have won the CGA Mid-Amateur more than twice. DeWitt captured the title in the 25-and-older event seven times from 1991 through 2002, including four straight at the end of that span. But Humerickhouse is making up ground.

"I want to keep that trophy here forever -- for as long as I can," he said. "I've got a good start. It feels awesome. I love this tournament. I love CGA state tournaments regardless, but this one I feel it's my niche. I feel comfortable in this tournament. I feel like I can compete with the guys in my age group."

And, in the case of this year's championship, he can compete quite a bit better than those guys.

Humerickhouse completed his three-peat on Sunday with a bogey-free round of 4-under-par 68.

In three rounds, the former golf professional played only two holes in over par -- with a double bogey and a bogey -- while he carded 14 birdies.

No other player in the field finished under par for 54 holes.

Chris Wilson (pictured at left) of Eisenhower Golf Club, an assistant coach for the Air Force Academy golf team who had played just three rounds in September prior to the Mid-Am, claimed second place at 1-over-par 217. His 12-foot birdie putt on the final hole gave him a 73 on Sunday.

Bryan Rusin, who shared the lead after the first round, tied for third place at 218 with fellow CommonGround Golf Course player Charles Santaularia. Both closed with 71s on Sunday.

As it turned out, there was the Humerickhouse Flight, and the one everyone else played in.

Asked when he realized he was playing for second place, Wilson said, "Almost when I showed up on the first tee. I didn't have 11 under -- what Keith finished -- in my tank.

Ironically, Humerickhouse accomplished Sunday what he told someone he'd do prior to the 2009 CGA Mid-Amateur, his first amateur tournament after being reinstated.

"I can remember going in and saying, 'I'm going to win this thing by 10.'" he said. "That's how cocky and confident I was back then. And I got humbled pretty quick. I ended up finishing third there. It made me realize that these guys (who compete in CGA championships) are good."

Which brings up the point: How rare is a player winning three straight CGA titles?

Before Sunday, it hadn't happened in any of the CGA's non-team championships since 2003, when John Olive won his third straight CGA Senior Match Play.

Though Humerickhouse emphasizes that all three of his consecutive Mid-Am wins are special, this one particularly falls into that category after what he went through earlier this year.

In February, after going to a medical center when his gums were bleeding for two straight days, Humerickhouse found out he had a blood disorder called Immune Thrombocytopenia in which the blood doesn't clot as it should. In Humerickhouse's case, he said his blood platelets were being destroyed by his immune system.

Humerickhouse was put on the drug Prednisone and stayed on it for almost four months. He gained nearly 40 pounds.

"I tried to play golf because I love it, but I was terrible," he said. "Everybody would tell me, 'You'll be all right. You'll come back.' But I felt terrible. It means a lot that I came back and stayed patient because I'm not the most patient guy in the world. I'm feeling better now and we're working on a different medication for me to take. But it's something I think I'm going to have to deal with for the rest of my life."

Still, Sunday's victory has Humerickhouse thinking big. As improbable as it may be, he'd like to surpass DeWitt's victory total of seven in the CGA Mid-Amateur. (Humerickhouse is pictured at left with his caddie, Jeff Shreeve, his girlfriend's father.)

"Just to be in that same category as Rick DeWitt -- and I'm not even there yet -- is pretty special," Humerickhouse said. "He's like the face of Colorado amateur golf (though DeWitt has been a professional now for several years).

"I guess I'm chasing him," Humerickhouse said without prompting. "I'd like to, at the end of it, have my name on (the trophy) more than he does. I love this tournament, I do. It's the one tournament that I feel comfortable -- not competing against college kids, but against guys who actually work for a living."

That last part hits close to home for Humerickhouse, who has been a sole proprietor in the flooring business since leaving the professional golf ranks in 2007.

"I work for a living, and I work my butt off," he said. "I'm a one-man show. There are days when I work all day and I go out and I trunk-slam it and go to the first tee and my back is killing me. But I do it because I love it. I think guys that work hard for a living can relate, and that feels good."