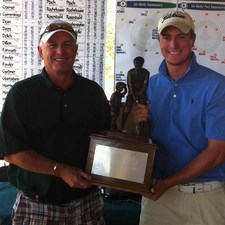 The Kepharts eagled the 310-yard, par-4 eighth hole, and added eight birdies on Sunday. After starting on the fifth hole, they went 4 under par from holes 8 through 10, then again from holes 18 through 3.

The champions finished two strokes ahead of Grant and Matt Porter of CommonGround Golf Course, who closed with a 71. Ben and Paul Zimmerman of The Pinery Country Club, and Aaron and Nick Babl of Twin Peaks Golf Course, shared third place at 140 after matching 73s. 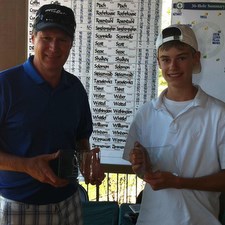 Doug and Nick Moore (pictured at left) ran away with the net division title, shooting 57-61 for a 26-under-par 118 total and a 14-shot win. The Babls and Ken and David Harris of Meadow Hills Golf Course tied for second place at 132.

The Loel and Caleb Lierman Medal, given to the team with a player 18 or under that has the lowest gross score, went to Geoffrey and Andrew Howe (70-76--146).