Kellough turns performance of a lifetime into state title 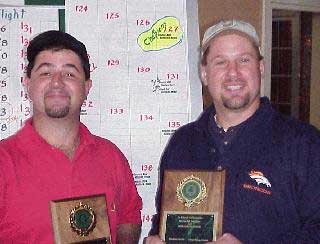 The Broadmoor Golf Club's East Course finally hosted the 36-hole CGA Net Four-Ball Championship after having to reschedule due to severe rain last April. First round open-division leaders, Kyle Snyder and Aaron Kellough, both of Golf Club Colorado, shot a final round net 68 to capture the team title by one stroke. On Wednesday they carded a net 59 to take a four-stroke lead after 18-holes. The pair relied heavily on Snyder's career best round (85 gross) that included two net 1's. Thursday’s round saw the leaders play their normal games, squandering their lead with sloppy play, and each incurred a two-stroke penalty for teeing off on the wrong hole. Snyder had to sink a five-foot putt on the 18th green to score a net bogey and secure the victory. The second place team of Vince Troisil and Randy Peacock, both of Ute Creek GC, began the day by scoring at will against the tricky greens of the Broadmoor’s East Course. They cooled off after missing two very short putts, managing to keep the pressure on the leaders until the final putt of the day.

Severe weather forced the cancellation of the second round of the senior division. The victory was awarded to the team of Marlon Osborne and Jim Quinn, both of Indian Tree GC. After the first day of play they were tied with the team of Frank Kanary and Dale Einspahr, both of Indian Tree GC at 64. With the cancellation of the second round Osborne and Quinn were declared the winners by a playoff amid a downpour. Five other teams were tied at 65.

In a four-ball stroke play event like this one, a team of two competitors play as partners, and each plays his own ball. The lower score of the partners is the teams' score for the hole. In this net four-ball event, players are given only 90% of their Course Handicap.