38 years after winning his first CGA title, Colorado Springs' Ivan claims his second one despite final-round 80 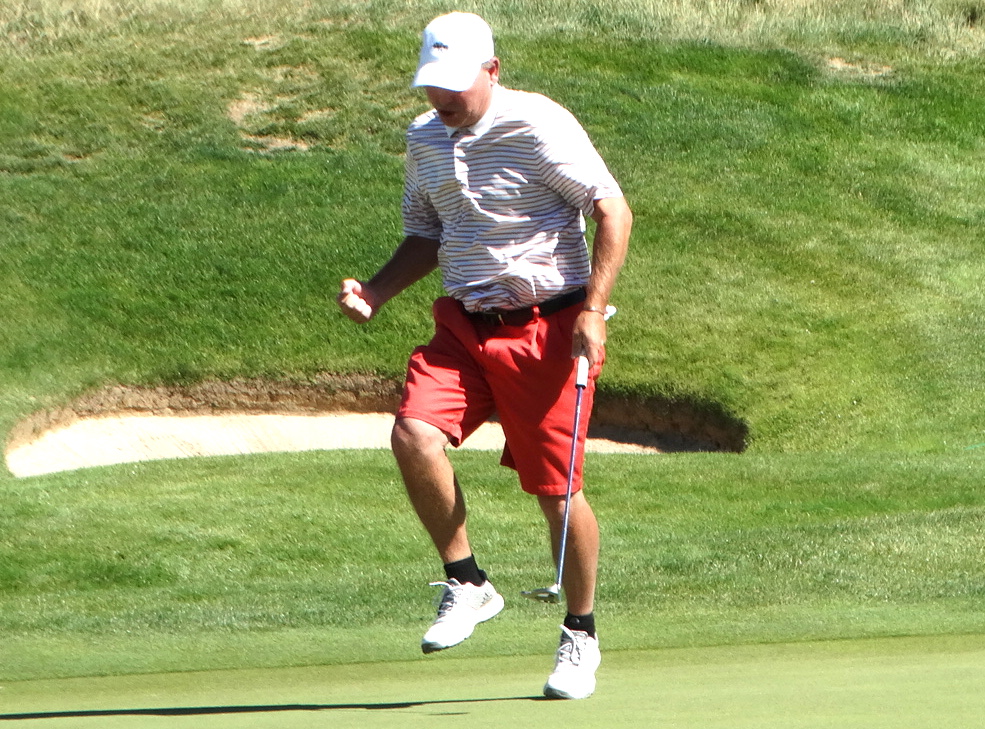 Very rarely does a winner of a major CGA individual championship post a round in the 80s, but Meridian Golf Club and Mother Nature led to an exception to the rule this week.

Still, Steve Ivan of Patty Jewett Golf Course in Colorado Springs didn't sweat it. He left Meridian with his first CGA title in 38 years, so it's all good.

Despite shooting an 8-over-par 80 in very windy conditions and on a challenging golf course on Thursday, Ivan held off his challengers and recorded a one-stroke victory in the 46th CGA Senior Amateur.

"It feels good," the 55-year-old said. "I had to go through qualifying at Walking Stick, and I qualified first there. There's all these little steps. With that 72 on Tuesday, I was like, 'I can do this.' And today, I'm proud of the way I hung in there."

Indeed, though he shot a final-round 80, Ivan didn't let things swirl out of control on Thursday. After taking a five-stroke lead into the last day, he found himself 7 over par for his first eight holes in round 3. Particularly frustrating was the triple bogey on No. 2, where Ivan hit a good drive, but -- unbeknownst to him or his playing partners -- the ball hit a cart sign and bounced back 50 yards. They couldn't find it, so he played another ball from the tee. It was only when he was driving back up the hole that the ball was found -- and by then it was too late.

Indeed, after not making a birdie through 15 holes, Ivan almost holed out his approach from 89 yards on the 16th hole, tapping in for birdie from 4 inches. Then on the 179-yard 17th, he hit a 6-iron to 10 feet and drained that putt for a second straight birdie. Though he didn't know it at the time, that gave him a two-stroke lead, and even a three-putt bogey from 40 feet on the 18th hole didn't make a difference in the outcome.

The retired insurance claims adjuster (above and left) finished with a 54-hole total of 9-over-par 225, one of the highest winning tallies in the history of this championship.

Three-time champion Robert Polk of Colorado Golf Club tied for fourth place at 227 with Paul Edwards of Meridian and Keith Atkins of Highland Meadows Golf Course. Edwards matched the low round of the tournament with a 72, while Atkins had a 74 and Polk a 76.

For Ivan, Thursday marked his first CGA title since he won the 1979 CGA Junior Match Play at The Ranch Country Club. A year later, he joined the University of Colorado golf team, where over the years he was teammates with Steve Jones, who would win the 1996 U.S. Open, Rick Cramer, Terry Kahl, Tim Smith, Matt Potter and Paul Lobato, coincidentally now the PGA head professional at Meridian.

"Today, that birdie on 16 was monumental," Ivan said. "The momentum just switched like that. I went from no emotion to off the charts. That was the whole tournament right there. That allowed me to hit that tee shot on 17 and make that putt, which allowed me to hit a good drive on 18. It's just the little engine that could."

By the way, this little engine that could is a throwback of sorts. He plays his golf with 1993 Ram Laser Fx irons -- of which he owns 13 sets. And because he likewise favors Royal grips, he claims to own more of those than anyone in the U.S.

"They call that OCD. The first step in recovery is admitting you've got a problem," he said with a smile.

But whatever the case, Ivan makes it work. Though he hasn't competed in many CGA championships, he's the winner of many, many tournaments in Colorado Springs between the Pikes Peak Amateur, the Valley Hi Springer and the city championship.

But on Thursday, both Harris and Minovich came very close to overtaking Ivan afer being seven strokes down going into the day.

Harris bogeyed the last two holes, missing a 3-foot par putt on No. 17. And Minovich (left) misfired on several close putts on the back nine.

"When I realized how windy it was, and knowing what can happen on this course, for us amateurs I think everybody has a chance, even coming from seven back," said Harris, a onetime U.S. Senior Amateur qualifier. "But a bogey-bogey finish to come in one behind is a little disappointing."

Minovich, meanwhile, was competing in this event for the first time.

"It was the little 3-foot putts I missed coming in (that cost me)," said the multiple-time Foothills Golf Course club champion. "It really did come down to putting for me. Yesterday, the last four holes, I missed three short putts. And today I missed two 4-footers and a 3-footer on the back nine."

The CGA Senior Amateur is limited to players 51 and older. In an effort to eventually match the age criteria for the U.S. Senior Amateur, which is limited to players 55 and older, each year beginning in 2017 the eligibility for CGA senior events will rise one year. So next year, for instance, the minimum age will be 52. From 2021 and beyond, competitors must be at least 55.


For all the scores from the CGA Senior Amateur, CLICK HERE.