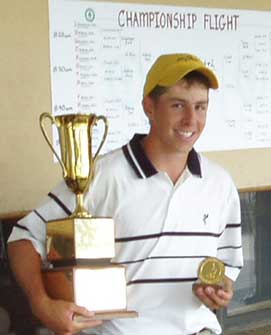 Bear Creek Golf Club – Patrick Grady of Eagle Trace Golf Club defeated Chase Watkins of Collindale Golf course 4 and 2 in the final match to claim the CGA State Boy's Match Play title. Following his impressive win, Grady talked about his fledgling golf career, “Since I began playing golf around my freshmen year in high school I’ve dreamed about winning an event as big as this. “It just hasn’t sunk in yet!” Grady, who will be a freshmen at the University of Colorado, Colorado Springs, recently finished up his high school years at Broomfield High School.

Grady took command of the match early making par holes one, three and four while Watkins could only manage bogies. By the time the pair completed their first nine holes, Grady had a commanding 4-up lead. That lead would hold very steady until the 15th hole. While on the tee at 15, Grady, who was dormie, pulled his tee shot into the hazard and Watkins took advantage. Following his win on 15, Watkins placed his tee ball in the middle of the fairway. However, his second shot would find the hazard and end his hopes for the title.

Grady joins the likes of Hale Irwin, Davis Love (father of Davis Love III), Brandt Jobe along with more recent names such as Shawn Wills (2003 CGA Match Play Champion) and Leif Olson who competed in the 2004 US Open Championship.

In the first flight, Branden Barron of Canterberry Golf Course defeated Jacob Lestishen of Lone Tree Golf Course 4 and 3. In a match that changed hands numerous times, 14 year-old Barron proved to be mature beyond his years. Earlier in the day, Barron defeated Derek Carleo of Elmwood Golf Course 3 and 2.