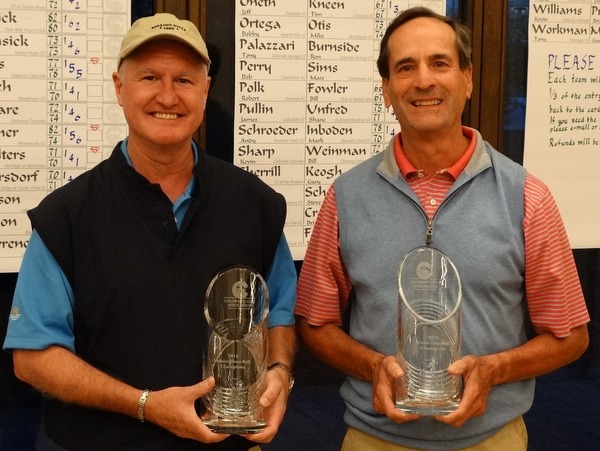 Robert Polk, who on Wednesday won his third CGA Senior Four-Ball Championship with his third different partner, joked with 2016 teammate Bill Fowler that he soon may be switching him out too.

"He keeps trading down, getting somebody younger," said Fowler, who just turned 53.

"I'm not stupid," the 60-year-old Polk said with a hearty laugh. "You better watch yourself."

All joking aside, the Polk-Fowler team has certainly proven effective. Besides being runner-up together in the 2013 CGA Senior Four-Ball and winning this year, they qualified for the inaugural U.S. Amateur Four-Ball, where a year ago they were the third-oldest team in the field.

And on Wednesday, in the first CGA championship of 2016, Polk and Fowler appeared close to mid-season form, despite the tournament being decided over 36 holes in a single day due to the snow left by a weekend storm.

Polk, from nearby Colorado Golf Club, and Fowler, from the Club at Rolling Hills, ham-and-egged it Wednesday for a one-stroke victory in the CGA Senior Four-Ball.

The two made an eagle, 10 birdies and a bogey Wednesday at Black Bear Golf Club. The eagle came from Polk (left), who drove the green on the 304-yard par-4 11th hole in the morning round, then drained a 60-foot putt. Fowler and Polk carded rounds of 66-67 for an 11-under-par 133 total.

So what makes Fowler and Polk such a formidable golf duo? Apparently, it's considerable determination to go along with a fair amount of talent.

"We try on every shot," Fowler noted. "Neither one of us gives up on any shot. Not until the ball is in the hole do I give up on that hole."

Added Polk: "We try to figure out a way to birdie every hole. That's the way we think. We're scrappers."

And it doesn't hurt that they seem to complement each other on the course. For instance, on their 31st hole Wednesday, when Polk was out of the hole after hitting his ball in the hazard, Fowler proceeded to birdie the par-5 by holing a 12-foot putt.

Then they saved a par from 4 feet on the 32nd hole, and Fowler (left) birdied the 33rd. With a one-stroke margin of victory, all proved crucial.

"Bill played great, especially the last nine," said Polk, a three-time CGA Senior Player of the Year. "He played really solid on the way in. We ham-and-egged it real well."

For his part, Fowler has now finished second, second and first the last three times he's competed in the CGA Senior Four-Ball, playing twice with Polk and once with Jim Reynolds. As for Polk, his previous Senior Four-Ball victories came with Jim Pierce and Steve Murphy.

The open-division CGA Four-Ball Championship, normally also held early in May, was postponed by the weather over the weekend. It has been rescheduled for Oct. 7-9 at Legacy GC in Westminster. Registration for that event will re-open on Friday.