A Winner for All Ages 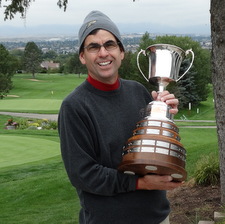 In baseball parlance, Kent Moore essentially has hit for the cycle when it comes to CGA individual championships -- in two different respects.

On Friday, the Colorado Golf Hall of Famer won a CGA championship for the fifth consecutive decade.

The golfer from Cherry Hills Country Club covered the "Teens" by claiming victory on Friday in the 43rd CGA Senior Stroke Play Championship at The Ranch Country Club.

Beyond Moore hitting all the bases as far as success over many decades, he's won almost every individual CGA championship for which he's been eligible.

Suffice it to say that puts him in very rarefied air.

Regarding being victorious in major CGA championships every decade since the 1970s, Moore (above and left) said with a smile, "It shows that I won't give up, I guess. Not a lot of talent, but a lot of persistence."

Or perhaps plenty of both.

As for winning nearly every individual championship for which he's eligible on the CGA schedule, he compared it to the record of another Colorado Golf Hall of Famer, Kim Eaton.

"I think she's won one at every level" of CWGA championships. "It's very, very, very satisfying. I wanted to win this (Senior Stroke Play) really badly. I worked really hard, so it's feels great. It's something I really, really wanted because of that, to round out" that career record.

And this one, at age 58, was convincing. Moore's six-shot victory at The Ranch matched the largest margin since Robert Polk won the event by nine in 2007. Jerry Kidney also prevailed by a half-dozen, in 2011.

Moore, runner-up in the Senior Stroke Play last year, fired a 1-under-par 70 Friday in temperatures that ranged from the mid-30s to the low-40s. That left him with a 2-over-par 215 total. Moore, who earned low-amateur honors in the 2014 HealthOne Colorado Senior Open, defied the conditions with a two-birdie, one-bogey round that closed the door on all his competitors.

At age 62, Steve Bell (left) of Denver Country Club claimed second place three months after also being the runner-up in the CGA Senior Match Play. Bell carded a 74 Friday for a 221 total. Grant Porter of CommonGround Golf Course took third place at 223 after closing with a 72, while Robert West of Cherry Creek Country Club finished fourth at 224 following a 71 on Friday.

Larry Netherton of Highlands Ranch Golf Club added a highlight during the final round, making a hole-in-one with an 8-iron at the 141-yard 17th hole en route to a 74. It was the eighth ace of Netherton's life, and his second in tournament golf.

As for Moore (below), his final-day performance was impressive, given that players were bundled up to combat the cold weather. The temperature didn't creep past the 40-degree mark until the leaders were well onto the back nine.

"Kent played great golf," Bell said. "I told him -- and I believe this -- if there is an adverse condition player, Kent is it. He is the best that I have ever seen (in that regard). We're out here with a lot of clothes on, cold temperature and so on, and I knew it was going to be a really hard day to overtake Kent. I'm happy with where I am.

"Obviously, everybody likes to win, but being a bridesmaid isn't half bad."

Moore's only bogey of the day came at the par-4 10th hole, where he hit an errant drive, left his approach in the front bunker and missed a 6-foot par putt. But starting on No. 13, he one-putted three times, never giving a glimmer of hope to his fellow players.

Moore is no stranger to the cold, having played college golf at Purdue, and now being the men's golf coach at Wheaton College near Chicago.

"We play in horrible weather in Illinois at times, and I'm always telling the boys, 'You've got to still keep your game and put your best swing on it every time,'" he said. "When you feel cold, or whatever, just your best swing. That's what I tried to do. I try to picture the shots and go all in on them."

David Delich (left) of the Broadmoor Golf Club, the 2012 champion, entered the day one behind Moore but struggled on Friday. The former Colorado College hockey player was 1 under par for the day through four holes, but triple bogeyed both No. 5 and 9. He finished with a 79 and tied for fifth place at 225.

Delich wasn't making excuses, but his plate is certainly full this week. Right after completing play Friday in the Senior Stroke Play, he left to catch a plane to the West Coast, where he'll play in the first round of the U.S. Senior Amateur Saturday in Newport Beach, Calif.

"I don't know if I was half here today or half gone," he said. "I should have been a little more focused on today's game. It just seemed like I was never in there today and focused. I made a couple of sloppy big numbers, which is not normal for me in a stroke-play event. I know what to do to prevent that."

"I didn't expect to play today (in the final round of the Senior Stroke Play), but I was in the hunt and that's why I played," he said. "I didn't have many tournament rounds under my belt, and it showed today. But I know the golf course (in Newport Beach); I've played it and I'm comfortable on it. I've flown out there many times the night before an event (in California) and played courses I haven't seen and fared well."