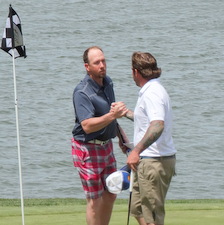 Three holes earlier, Keith Humerickhouse had uncharacteristically bladed a bunker shot over the green. Now, on the 18th hole at Todd Creek Golf Club in Thornton, with the CGA Four-Ball Championship on the line, the left-hander remembered his poor shot all too well.

With a narrow strip of green running away from him, a big lake on the other side of the putting surface, and his playing partner having hit into the water, the former playing professional worked a little magic.

He cozied his sand shot down to within 2 feet of the hole and made the putt for a birdie.

That gave Humerickhouse and partner Jared Bickling a one-stroke victory in the season-opening CGA Four-Ball.

"The shot of the tournament for me was the bunker shot on 18," said Humerickhouse, winner of the last four CGA Mid-Amateur titles. "That bunker shot was awesome. That (bladed sand shot on 15) was basically my last thought going into that bunker shot. And the (one on 15) was a cakewalk compared to that one -- no green, the slant going right toward the water. My partner hit it in the water, so I was like, 'Here we go.' But the shot (pictured at left) came off awesome."

It led to the third consecutive birdie by Humerickhouse and to his sixth CGA title, while Bickling won his first.

Humerickhouse, who plays out of Glenwood Springs Golf Club, and Bickling, from Gypsum Creek Golf Course, shot the low round of the tournament, an 8-under-par 64, on Sunday to rally for the championship.

Second-round leaders Jon Lindstrom and Richard Bradsby of Lakewood Country Club pulled into a tie for the top spot with a birdie on the 15th hole.

"This is awesome," said Bickling, who is 38 years old, like Humerickhouse. "This is our third year playing this event. The first year we were garbage, the second year we were not quite so garbage, and then this year ... We don't come out here to just play golf; we come here to win."

Humerickhouse and Bickling's 64 on Sunday gave them an 18-under-par 198 total for three days.

Lindstrom and Bradsby closed with a 66 in the scratch best-ball event to place second at 199. Nick Nosewicz and Heath Andersen of Meadow Hills Golf Course finished third at 202.

Humerickhouse and Bickling started Sunday with a bogey, and Humerickhouse bogeyed the second hole. But Bickling's 20-foot birdie there gave the team a spark, and the two made nine birdies on the last 17 holes.

"That (birdie) calmed us both down," said Bickling, pictured in the dark shirt at left, with Humerickhouse.

Humerickhouse, who shot 70 on his own ball each of the three days, relished sharing the title with Bickling.

"We play a lot of golf together," the left-hander said. "With him as my partner, I feel like we can contend every time we play. To finally get it done, it's awesome. I feel really good for him because it's his first one. Every time you win one of these it's great because the field is so good.

"We played really good as a team today -- really good. If somebody was in trouble, we picked each other up. It was ham and eggs for sure today."